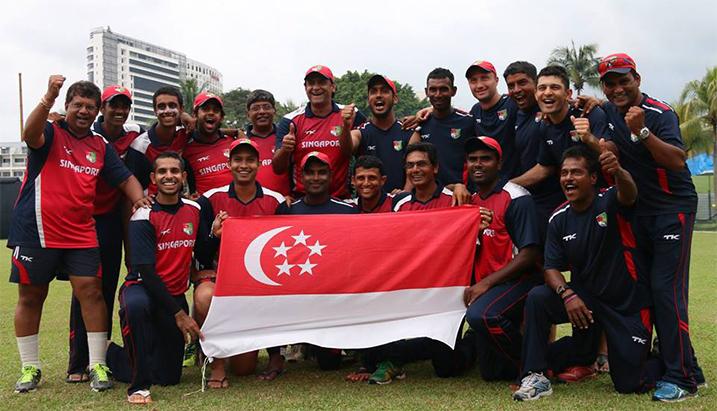 Cricket in Singapore has been played for well over a century. The first recorded mention of cricket in Singapore was in 1837 when a “Mr Z” complained, in a letter to the Singapore Free Press, of cricket being played near a church on a Sunday in violation of the Christian Sabbath. The next surviving report is a newspaper record on 20 April 1843 that ‘the manly game of cricket resumed in the settlement, a match being played between Singaporeans and the “Dido”. The first fully recorded match was played on 14th October 1852 under the title of ‘A Picked Eleven Vs The Club’ (Singapore Cricket Club) between 6 on one side and 9 on the other. The picked lot made 11 in the first innings and 1 in the second. The club scored 14 and 12.

Cricket was an important recreational activity, with matches often played against the officers of visiting ships. The Singapore Cricket Club was formed in 1852 and played its first match amongst themselves the same year. The quality of cricket in these early years was quite poor, and it wasn’t until 1865 before a team total of more than 100 was scored. Louis Glass became the first person in Singapore to record a century two years later.

The Singapore Cricket Club eventually began to play against teams from other parts of British Malaya such as Penang, Perak and Kuala Lumpur and this eventually led to an invitation from Hong Kong to send a team there, which saw the beginning of the long running series of “Interport matches”.

The 1890 invitation from Hong Kong led to the formation of the Straits Settlements cricket team, and Singapore played Hong Kong in two two-day matches, both of which were lost. The series was the beginning of the “Interport Matches”, which continued until 1987. Hong Kong and Ceylon came to Singapore the following year, and the Straits Settlements won both matches, also drawing against a combined Ceylon/Hong Kong team. The Straits Settlements team beat Ceylon in Colombo in 1893, and played a match in Jakarta in 1895. Matches against the Federated Malay States began in 1896, and against Shanghai in 1897.

The Straits Settlement team played Burma in 1906, and their involvement in the Interport Matches ceased in 1909, when they were replaced by an All Malaya team. The Straits Settlements visited Bangkok in 1910, though from them their only matches came annually against the Federated Malay States until 1940. These fixtures continue in the modern era as the Saudara Cup matches between Singapore and Malaysia.

The Singapore team did play twice during the Straits Settlements team era, playing twice against WAS Oldfield’s XI in 1927, losing both matches by an innings. They next played in 1957, drawing at home to Ceylon. Various teams visited Singapore in the 1960s, including Worcestershire.

The Interport Matches resumed in 1968 with Singapore drawing against Hong Kong. These matches were played occasionally until 1987. In 1970, the Saudara Cup match against Malaysia was played for the first time, this continues annually to the present day. Also that year, Singapore played an MCC side captain by Tony Lewis and featuring Geoff Boycott. The match was won by the MCC.

Since the Second World War cricket has been widely played in Singapore. The Singapore Cricket Association was set up in 1949 to which all the cricket playing clubs are affiliated and which has successfully organised inter club tournaments, tours, interstate and representative fixtures and made every effort to encourage the young.

Singapore became an associate member of the ICC in 1974 and three years later won the Saudara Cup for the first time. In 1978, Singapore played India at home, the match ending in a draw. Singapore took part in the first ICC Trophy in England in 1979 but could only finish fourth in their first round group after only beating Argentina. Singapore finished fourth out of eight teams in their first round group in the 1982 tournament and withdrew from the 1986 tournament when several players couldn’t get leave from work.

Singapore played in the South East Asian Tournament for the first time in 1984, playing in the event again in 1988 and 1992 (hosted by Singapore), though Singapore never reached the final as Bangladesh and Hong Kong finished first and second on each occasion. The final Interport Match took place in Singapore in 1987, with Hong Kong beating the home side. Singapore returned to the ICC Trophy for the 1990 tournament in the Netherlands, beating Malaysia and Israel during the event, and failing to progress past the first round.

Singapore began playing in the Tuanku Ja’afar Cup in 1991, an annual tournament against Malaysia, Hong Kong and Thailand. They won the event just once, in 1994, a year in which they finished 19th out of 20 teams in the ICC Trophy. The Stan Nagaiah Trophy, an annual three match series of one-day matches against Malaysia, began the following year. Singapore played in the first ACC Trophy in 1996, beating the Maldives and Thailand but failing to go past the first round. Singapore finished 14th in the 1997 ICC Trophy and could only beat Papua New Guinea in the 1998 ACC Trophy, again failing to go past the first round.

The first two major tournaments of the 21st century for Singapore got off to a bad start as Singapore lost all their first round matches in both the 2000 ACC Trophy in the UAE and the 2001 ICC Trophy in Ontario, Singapore’s final ICC Trophy to date. Singapore hosted the ACC Trophy in 2002, beating the Maldives and Thailand (by 325 runs) but again failing to progress beyond the first round, a performance Singapore repeated in 2004. Singapore finished fourth in the ACC Fast Track Nations Tournament in 2004 and 2005.

With 100 plus teams in the domestic league spread over six divisions and an institutions & corporate league, 19 cricket grounds, an average of 35 fixtures a week, 80-100 registered umpires and scorers, and a corps of emerging male and female cricketers, Singapore Cricket is riding an upswing of interest in the game. Domestic cricket has never been busier with many new teams joining the Association in the past three years. Singapore holds the highest number of officially-sanctioned cricket matches of any non-Test playing country in the world. To put this growth into perspective, there were just 14 teams in the Singapore league in 2003.

An influx of seasoned new players to Singapore is adding to the strength of the team, In 2010 former Sri Lankan ace Marvan Atapattu came on board as national coach. Singapore missed out by the narrowest of margins, in controversial circumstances, on a place in the final of the World Cricket League Division 5 in Nepal, a circumstance which derailed much of the forward momentum.

The year 2012 has been a busy year of growth and success and we are pleased to report that progress has continued to be made towards improvement in the delivery of organisation’s programs and events in line with our strategic vision and mission. There have been several successful cricket events hosted by both SCA and its member clubs. We have seen successfully organised competitions both at the senior as well as at the junior level, youth clinics, carnivals, development programs, educational courses, etc. National teams representing Singapore at all levels took part in international tournaments through the year, officials and umpires representing Singapore at the international levels have all brought accolades to the organisation.

The highlight of the year has been the successful hosting of the Pepsi ICC World Cricket League Division 5 in Singapore and promotion of Singapore to Division 4 by virtue of being crowned champions of the Division 5 tournament. Singapore narrowly missed promotion to Division 3 in the later part of the year finishing third in the Pepsi ICC WCL Division 4 in Malaysia; however, Singapore improved its world ranking by 5 places this year moving on to 27th place from 32nd place last year in the ICC world rankings. The other two significant developments in the year have been the introduction of the inaugural Junior Cricket League and the launch of the Discover Cricket Program to create awareness and to grow the participant base of the game throughout the island through an integrated youth development program targeting schools and community centres.